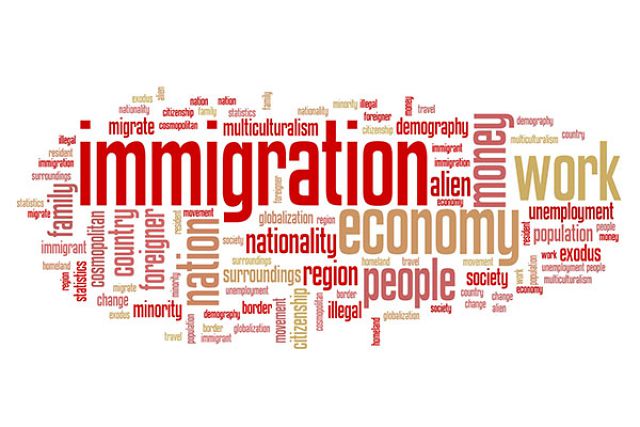 Immigration reform has always been a bone of contention between the Democrats and the Republicans in the United States. The civil war in the Middle East has displaced thousands of refugees who make their way to America, hoping for a fresh start.

But this also raises the question of whether they should be called ‘immigrants’.

For long, there has been the H1B visa intended at attracting top talent to the country – scientists, doctors, engineers and so forth. The intention behind this was to fill the gaps that could not be filled by Americans. This worked for a while – you would see several Indians at NASA (they form more than a third of the workforce).

And there is the H2 visa, which was intended to fill the gaps that would not be filled by Americans. These consist of low-skilled labor, such as in agriculture.

Between these two extremes, the American middle class was to be protected from losing their jobs. These were the original aims of the U.S. immigration policy when it was first introduced.

The problem is that they came about at a time when jobs were plenty. Baby boomers didn’t have to go to college to get a job. But the generation that came after them, the millennials (those born between 1980 and 2000), didn’t have this luxury. They went to college, obtained highly specialized degrees, and tried to enter the workforce, only to be told that employers were outsourcing work to countries where it could be done for cheaper.

This resulted in underemployment and even unemployment.

Those who didn’t go to college found it tough, with illegal immigrants taking away jobs. Employers hire them because they are undocumented and do not need to be paid the minimum wage mandated by the Government.

This is why there is a crying need for immigration reform.

U.S. President Donald Trump, in his first address to Congress, raised the issue, suggesting that the time has come for an overhaul of the system. He pointed out the example of Australia, where it is simpler, if you can support yourself financially, you are welcome. He added that immigration laws would be enforced more strictly under his administration.

Taking a closer look at the numbers

There are some 800,000 who come into the country illegally every year.

A wall is proposed to be constructed along the United States-Mexico border to stem the flow of illegal immigrants.

The U.S. Chamber of Commerce is opposed to this move, as it hampers their ability to hire undocumented workers at less than the minimum wage.

Up to 200,000 university-educated professionals can legally enter the United States every year, but there are also 800,000 Americans who graduate with degrees in business, technology and healthcare.

Foreign workers were hitherto preferred because they could be hired for cheaper. A software engineer from India needed to be paid only $5,000 a month. Americans struggling with college debt would find it hard to work at this pay grade.

The minimum wage of $60,000 a year for H1B visa holders (unchanged since 1989) is proposed to be replaced with $130,000. This will truly make employers hire workers on merit, be they immigrants or American citizens.

The per country cap on immigration is all set to be done away with, opening the doors to merit, irrespective of the country of origin.

The new minimum annual wage is in accordance with the median national annual wage published by the Department of Labor for Computer and Mathematical Occupations, which is $132,000.

The minimum wage can be raised further without additional legislation.